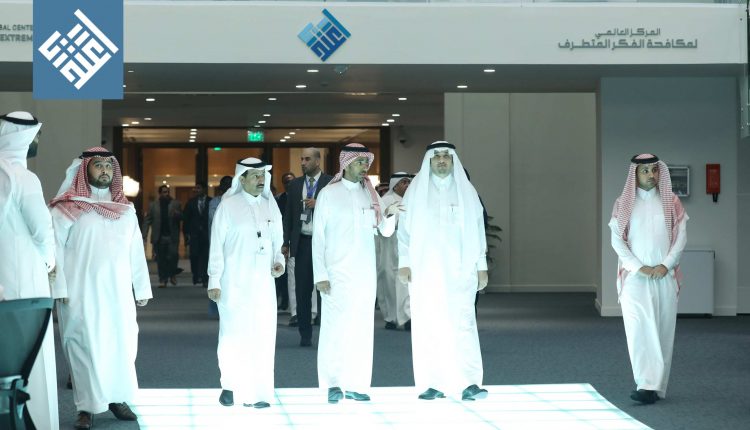 Two delegations from Naif Arab University for Security Sciences (NAUSS) and the Islamic Cooperation Organization (ICO) visited Etidal on April 9. The delegations included HE President of NAUSS, Dr. Abdulmajeed Al-Bunyan, and guests of the conference on the Role of Education in Combating Terrorism and Extremism held at the university in Riyadh. The Center’s Secretary General, Dr. Mansour Alshammari, along with a number of Etidal officials, received the two delegations.

Dr. Al-Bunyan said, “We at NAUSS and ICO and the guests of the conference express our gratitude and appreciation to Etidal. Words can’t express our feelings towards this very important accomplishment which aims to combat extremist ideology.”

He stressed that “what characterizes Etidal’s work is that it is scientifically based, especially in relation to using data and advanced technologies in combating extremist ideology. Since any terrorist act is a result of an extremist ideology, the first line of defense against terrorism is fighting this ideology.” He concluded, “I congratulate you on this great achievement. There is no doubt that you spread light and illuminate darkness.”

Dr. Alshammari, on his part, expressed that “we at Etidal stretch out our hands to all that serve humanity, especially since the terrorist operations we’ve witnessed in recent years were very sad and painful. Saudi Arabia was influenced by such acts, in addition to what other parts of the world witnessed, which led to complete chaos and resulted in a lot of human casualties.”