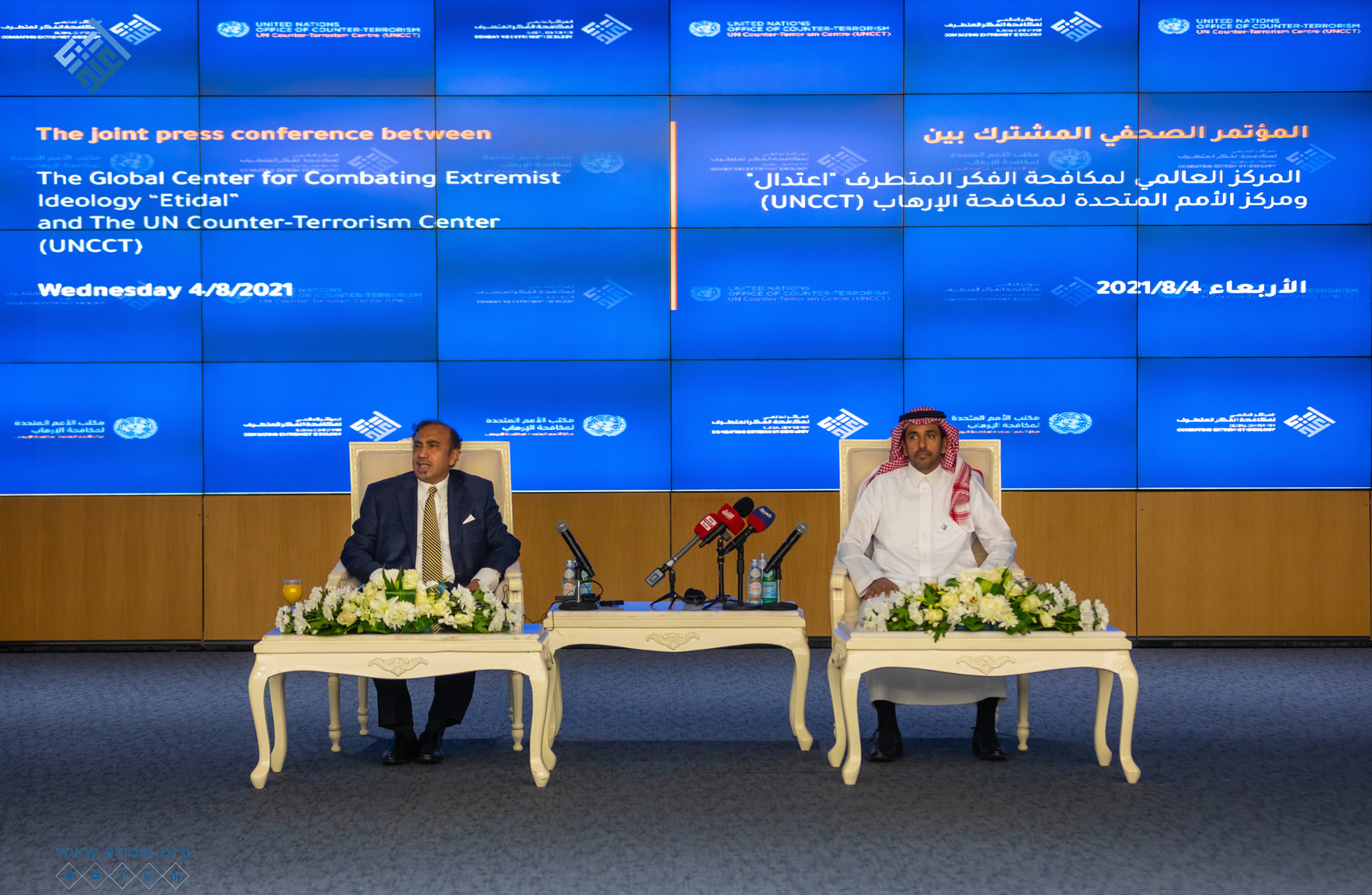 His Excellency the Secretary-General of the Global Center for Combating Extremist Ideology (Etidal), Dr. Mansour Al-Shammari, and the Director of the United Nations Counter-Terrorism Center, Dr. Jahangir Khan, held a joint press conference at Etidal headquarters in the Saudi capital, Riyadh, today (Wednesday),  August 4, 2021 in which they reviewed joint efforts in combating extremist thoughts and ideologies.

His Excellency the Secretary-General of Etidal, delivered a speech on this occasion, and said, “I extend my sincere gratitude in my name and Etidal’s employees to the Custodian of the Two Holy Mosques King Salman bin Abdulaziz and His Royal Highness the Crown Prince Muhammad bin Salman bin Abdulaziz,  Deputy Prime Minister and Minister of Defense ,who spare no effort to support every international effort to combat extremist ideology and terrorism, believing that extremism and terrorism are the main enemy for the development and stability of any society in the world. As it’s known that, – the success of development plans depends on the ability of countries to protect their capabilities and their citizens from the dangers of this ideolgy.

In his speech, His Excellency pointed out the affirmation of His Royal Highness, Crown Prince Muhammad bin Salman bin Abdulaziz, in eliminating extremism, and quoting His Highness’ words in (November) 2020: “I made promises in 2017 that we would eliminate extremism immediately, and we started actively a serious campaign to address the causes and confront the phenomena… In one year, we were able to eliminate an ideological project that was made over 40 years… Today, extremism is no longer accepted in the Kingdom of Saudi Arabia, and no longer appears on the surface, but has become pariah, concealed and isolated.

About Etidal’s goals, His Excellency said, “Etidal is working to expose the extremist organizations’ methods of targeting young people, educating them about the dangers of this ideology, and refuting suspicions that terrorist organizations exploit in the processes of recruitment. They exploited the pandemic, and tried to expand and undermine messages that aimed to protect people during this situation. We at (Etidal) are aware of the dangers of this ideology and the terrorist organizations that exploit all possible means to spread it. We have developed specialized plans and strategies: technical, ideological, and media, to refute, thwart and deny this ideology, in addition to launching a number of specialized initiatives to increase societal interaction with the center’s goals, Including: Moderate – Tafneed – Research Cooperation – University Training – and  2gether-معا Initiative, which is dedicated to educating people with hearing disabilities using sign language, all of which work in parallel to protect and develop societiess to confront extremist ideology”.

At the conclusion of his speech, His Excellency Dr. Mansour Al-Shammari stressed, “Today, for the third time, we are honored to host Dr. Jahangir Khan, to discuss ways of cooperation in confronting extremism, and protecting current and future societies and generations from its dangers, and we reaffirm here once again Etidal’s support for the United Nations Counter-Terrorism Strategy”.

Regarding his visit to the Kingdom, Khan said, “I had excellent talks in the past three days with a number of key partners, such as: the Ministry of Foreign Affairs, the Presidency of State Security, the Islamic Coalition to Combat Terrorism Center, Etidal, King Abdullah Center for National Dialogue, Terrorist Financing Targeting Center, and a number of from different institutions, This forms the structure of our future partnership. In addition, we are working with the Council of Arab Interior Ministers, which is chaired by His Highness the Minister of Interior Prince Abdulaziz bin Saud bin Nayef, where at the request of the Council of Arab Interior Ministers, the United Nations Counter-Terrorism Center is working with the Council to develop a new Arab strategy to combat terrorism, which would include Counter-terrorism efforts in line with the United Nations resolution related to preventing violent extremism and combating terrorism. We welcome this initiative chaired by the Kingdom of Saudi Arabia under the leadership of His Highness the Minister of Interior”.

The Director of the United Nations Center for Counter-Terrorism (UNCCT), Dr. Jahangir Khan, expressed his hope to work closely with the Global Center for Combating Extremist Ideology (Etidal), and said, “We hope to work closely with Etidal, which plays a leading role in various dimensions  in combating and preventing violent extremism, and we have had excellent discussions in the past two days on how to benefit and cooperate in specific areas, which are the primary focus of both of our centers in this important filed”. He added, “I would like to congratulate (Etidal) for the unique programs and projects that they are working on, as they are setting an example in the Kingdom of Saudi Arabia. Violent extremism is a global challenge, and here we always emphasize that extremism has no religion, race, or culture, and we must confront it with all means. The Arab and Islamic region has suffered and paid the price against combating terrorism and violent extremism”.

At the end of his speech, the Director of the United Nations Counter-Terrorism Center said, “I would like to congratulate the Kingdom of Saudi Arabia, under the leadership of King Salman bin Abdulaziz, and His Royal Highness, Crown Prince Mohammed bin Salman, for confronting terrorism, as they are setting an example for all countries, especially the policies pursued by the Kingdom, can benefit other institutions regarding counter terrorism and preventing violent extremism.” 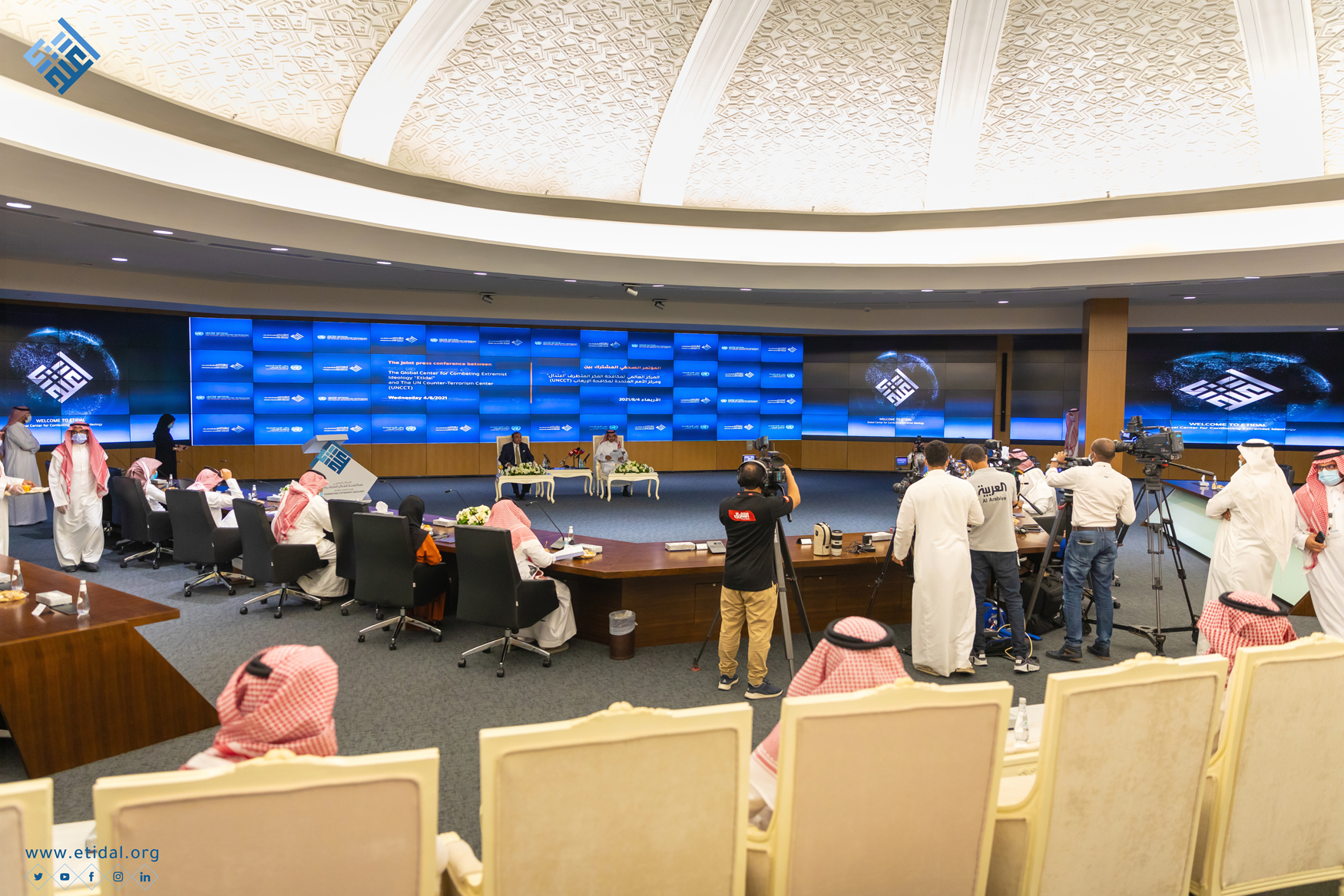 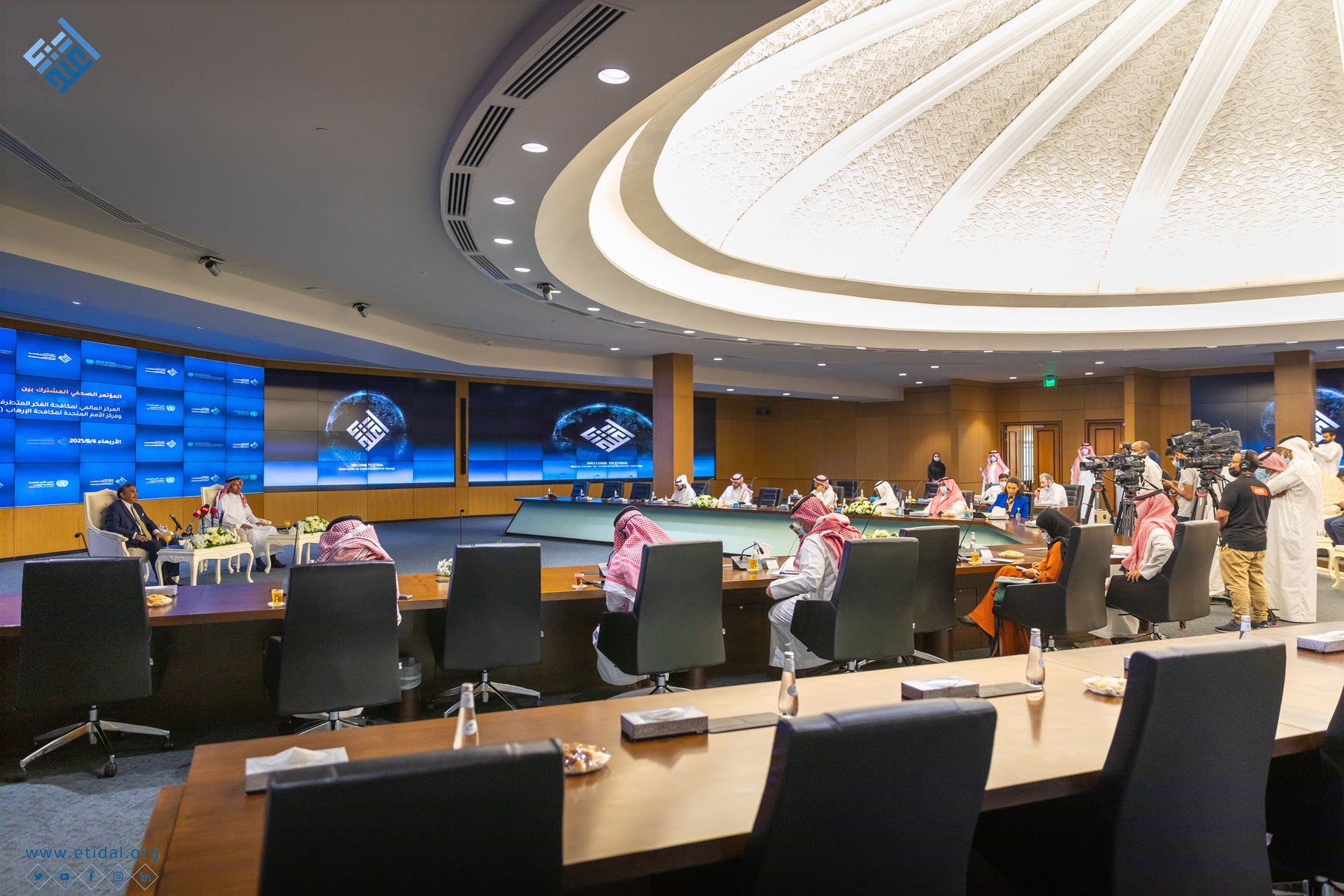 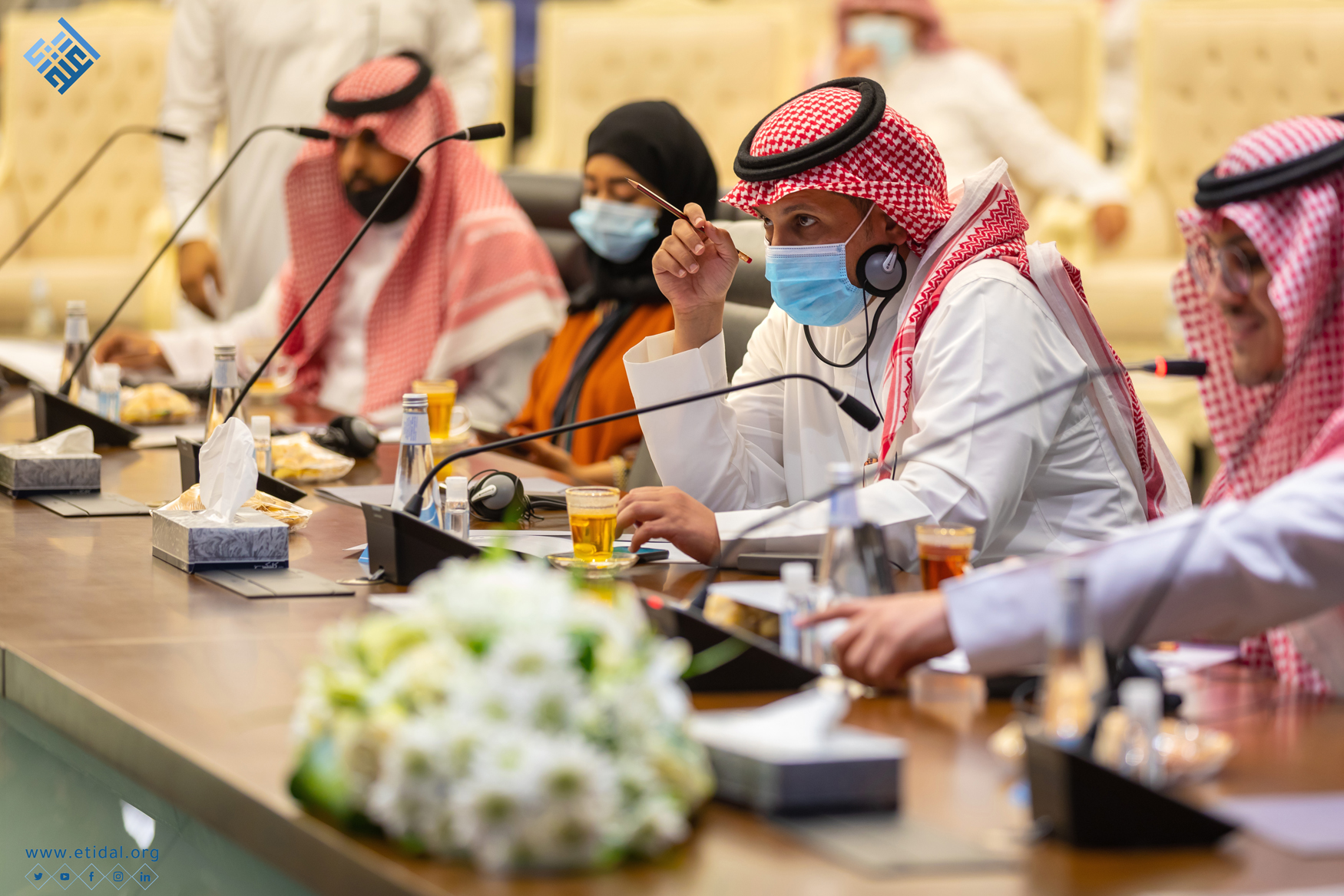 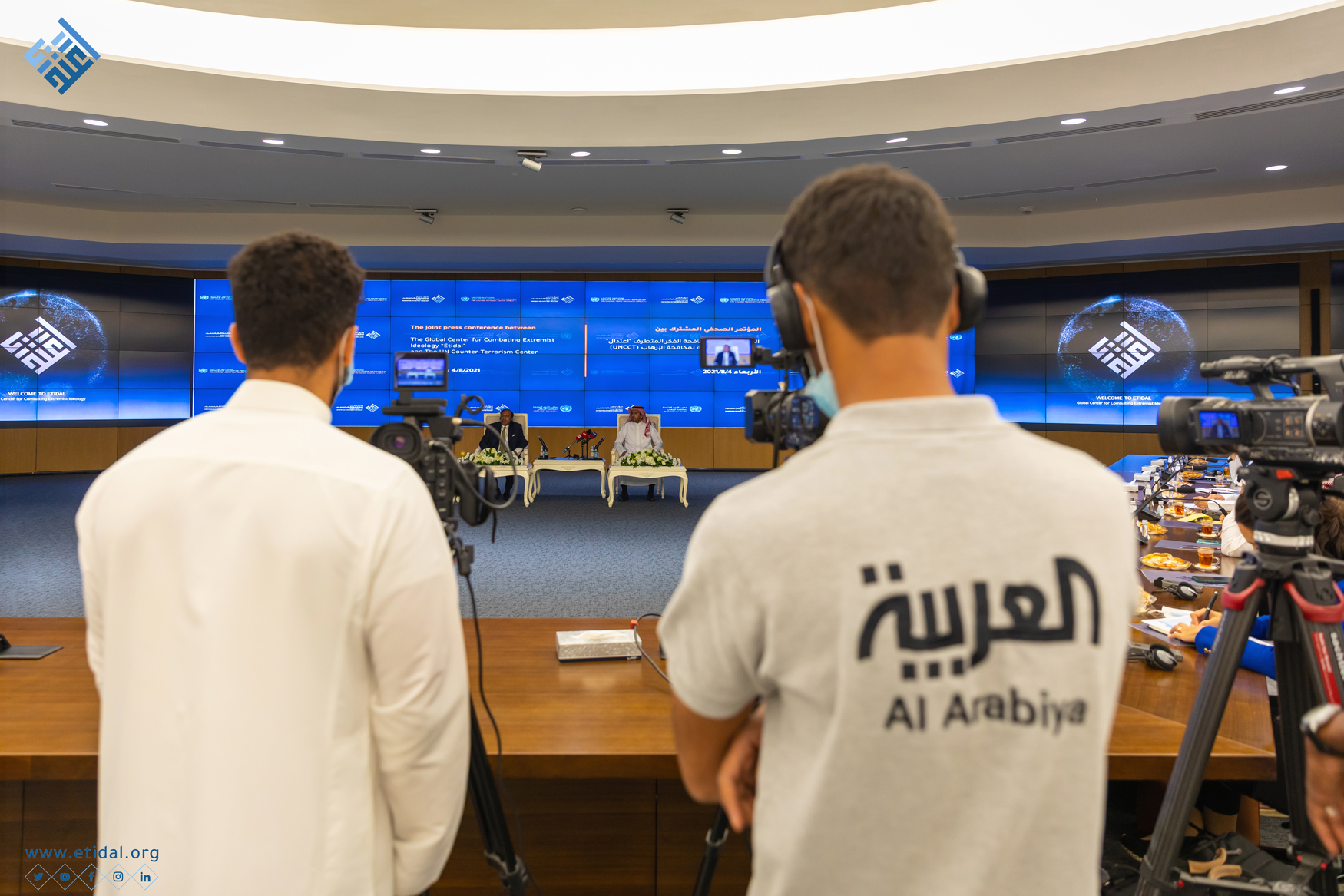 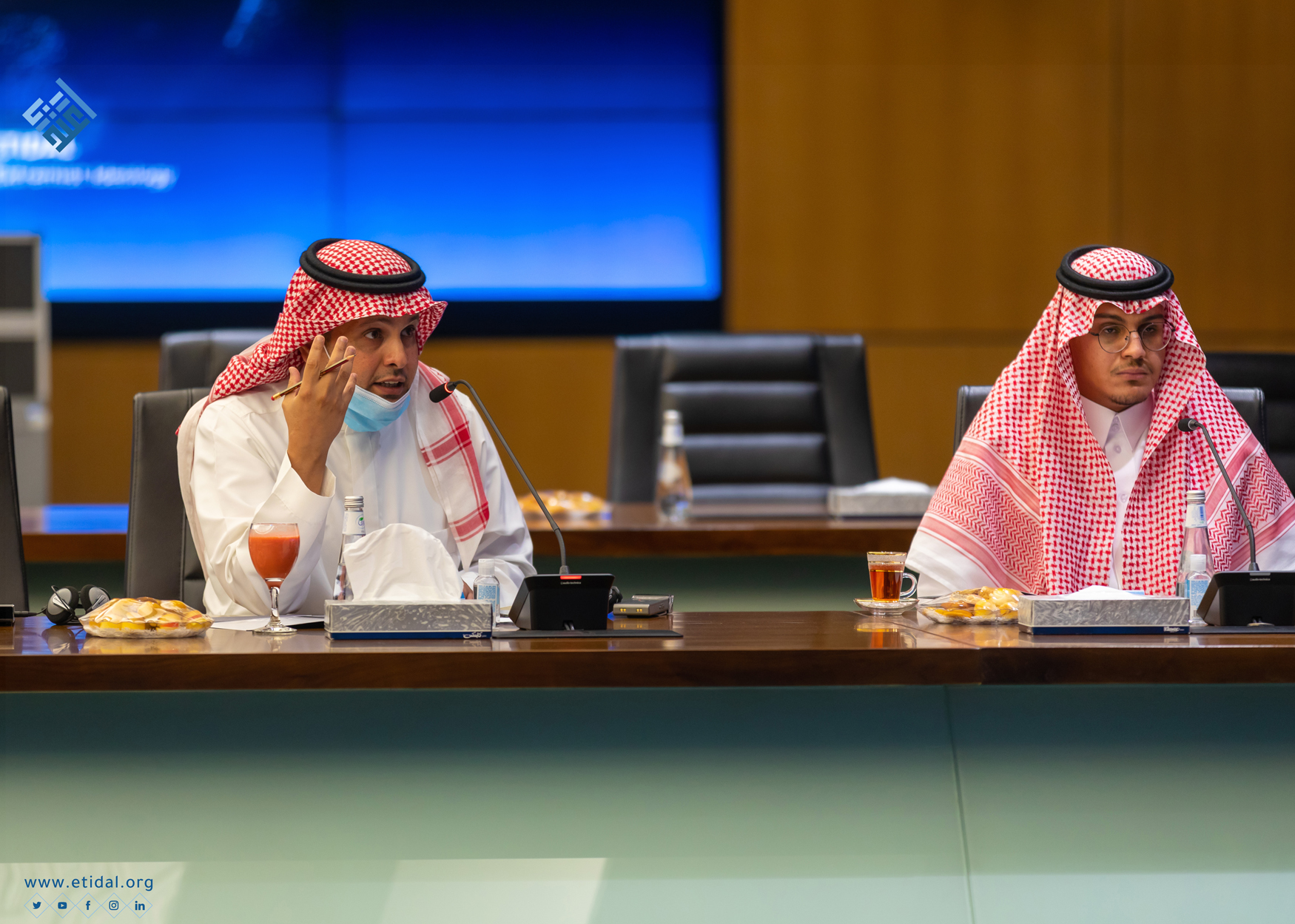 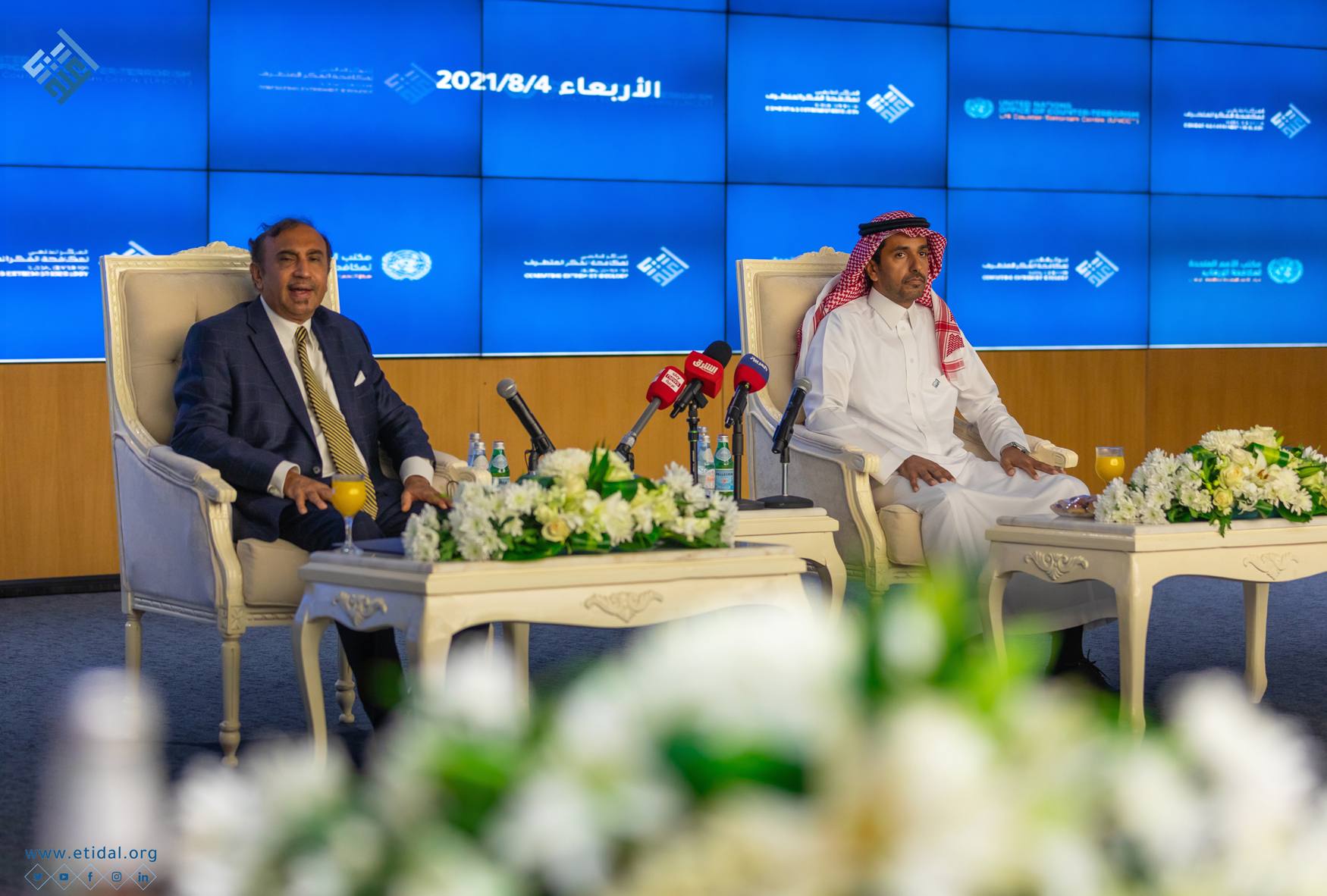