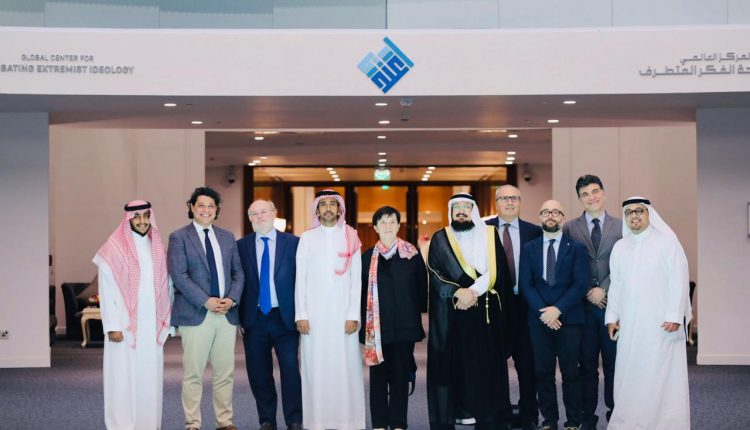 Adding to the list of regional and international visitors to the Center since its launch, the Global Center for Combating Extremist Ideology (Etidal) received a high-ranking global delegation, including the President of Meeting Rimini for Friendship Amongst Peoples Foundation, Emilia Guarnieri, and other members of the foundation.

During the visit, the delegation was briefed on the Center’s techniques for monitoring extremist organizations’ movements and activities using advanced technologies.

The President of Meeting Rimini, Emilia Guarnieri, praised the Center’s efforts in combating extremist ideology and its contributions in building friendships among different peoples and communities.

“In our foundation, we believe in resisting violence through promoting closeness among cultures and peoples,” she said.

“What I saw and heard from you represents great work, and the efforts you make help youth not to be victims of the circle of violence,” she added. She called for “exposing youth in various communities to a more positive discourse concerning life and the future.” Guarnieri reaffirmed the importance of Etidal’s efforts in promoting “tolerance of those who are different and building friendships among peoples.” She concluded by expressing her “appreciation and gratitude to what you [Etidal] are doing.”

In response to a question about the possibility of collaboration and coordination with the Center in relation to combating extremism, an official at Etidal confirmed that “there are programs that are based on collaborations with a number of governmental, non-governmental and civil society organizations.”

At the end of the visit, the members of the delegation expressed their appreciation and gratitude for the efforts made by the Global Center for Combating Extremist Ideology (Etidal) towards promoting the values of tolerance and coexistence regionally and globally.