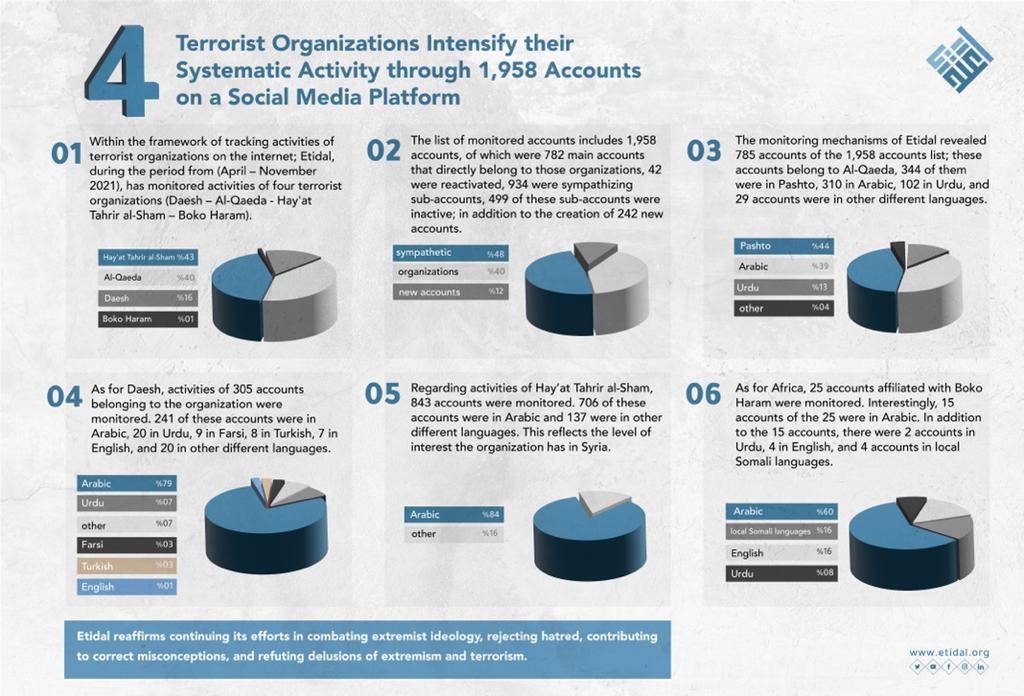 The Global Center for Combating Extremist Ideology (Etidal) has monitored the activities of four terrorist organizations (Daesh – al-Qaeda – Hay’at Tahrir al-Sham – Boko Haram). Due to disputes and divisions among their ranks, these organizations intensified their propagandistic activity through 1,958 accounts on one of the social media platforms for repositioning.

Etidal has observed activities of those accounts during a period from April to November 2021. The findings show that 782 main accounts directly belong to those organizations, 42 were reactivated including 934 “sympathizing” sub-accounts, 499 were inactive, and 242 new accounts were created.

In addition, Etidal’s monitoring mechanisms revealed that Al-Qaeda attempted to re-spread virtually through 785 accounts in different languages ​​on the same digital platform, including 344 accounts in Pashto, 310 in Arabic, 102 in Urdu, and 29 accounts in other languages. The organization’s primary goal was to maintain its image in front of its followers, which serves the recruitment and spreading attempts.

Etidal also revealed that 843 accounts were affiliated with “Hay’at Tahrir al-Sham” among the list of the monitored accounts, including 706 accounts in Arabic, and 137 accounts in other languages, which reflects the organization’s level of interest inside Syria.

As for Daesh, the digital technology in Etidal has found out that this organization has activated 305 accounts, 241 were in Arabic, 20 in Urdu, 9 in Farsi, 8 in Turkish, 7 in English, and 20 in different languages.

In Africa, Etidal monitored 25 accounts affiliated with “Boko Haram”, but what is noteworthy about these accounts is that the majority -15 accounts- were all in Arabic, in addition to two accounts in Urdu, four in English, and the same in Somali local languages.