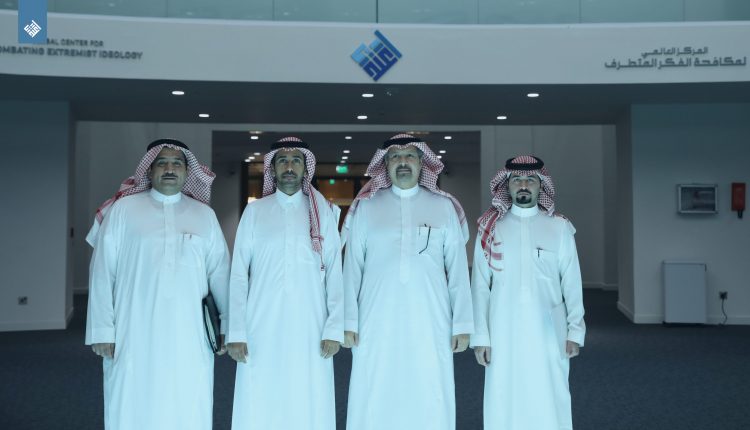 During their reception by the Secretary-General of the Global Center for Combating Extremist Ideology, Dr. Mansour Alshammari, on November 14, 2019, a delegation from King Salman Humanitarian Aid & Relief Center (KSrelief) discussed ways of cooperation between the two parties to serve the joint efforts of promoting values of coexistence and peace, especially in regions that are most in need of these efforts, in addition to combating extremism regionally and globally. During the visit, the delegation was briefed on the Center’s ideological, digital and media mechanisms, in addition to the techniques used in the monitoring and analysis processes and on its existing and future projects. The delegation expressed its eagerness to benefit from the experience Etidal has in promoting its initiative on combating extremism through humanitarian acts, expressing appreciation for the role played by the Center in this respect.

“KSrelief has an initiative focusing on combating extremism through humanitarian work that targets women and children, and we have a desire to benefit from the experience of Etidal in this field”, said Dr. Aqeel bin Jamaan Al-Ghamdi, Assistant Supervisor General of Planning and Development at KSrelief in a speech during the occasion.

The Secretary-General of Etidal, Dr. Mansour Alshammari, expressed the Center’s willingness to collaborate with KSrelief, noting that the efforts made by KSrelief call for pride, as it is a key factor in promoting values of real coexistence and peace on the ground.

He stressed that the King Salman Center is an integrated project making admirable efforts with clear objectives, and Etidal offers all of its capabilities and expertise to contribute to the success of any of the current or future initiatives and to enhance the efforts made.

At the end of the visit, the guests took some commemorative pictures with the Secretary-General, Dr. Mansour Alshammari.